Sharmi on the Trot

Archive for the tag “brinjal”

Of Remy and Ratatouille

I enjoy watching animated films, I really do. I love the colours, the soundtrack, the plots; animation takes me back to my childhood days when my grandfather would bring video tapes of Disney films and the two of us would watch them in the evenings. Snow White, Sleeping Beauty, Cinderella…

Last weekend I re-watched Ratatouille. I love the film. It’s a film which leaves me salivating, eager to try new flavour combinations I could never even have imagined could work. The film just makes food so appealing that it makes you hungry watching Remy (the little rat) create magic in the kitchen thanks to Linguini’s hands.

The fresh veggies from the market

But what left me wide-eyed was at the end of the film. It was the mishmash of green, yellow and red — the Ratatouille — he created I couldn’t stop dreaming about. All perfectly sliced and standing tall in a baking dish. It just looked so ridiculously delicious that even a staunch non-vegetarian would drool over it. Just as Anton Engo’s (the food critic) cold heart melted tasting the simple flavours, I knew I had to try and make it.

Thus, I went to the market and picked up fresh veggies and tried to recreate the hearty French regional vegetable dish. (It’s not perfect and pretty but believe me, tasted heavenly!)

Standing tall before the remaining tomato sauce gets drizzled

In a small sauce pan heat 1 tbp olive oil. Add the garlic and onions and saute. Add the tomato puree and season with salt and pepper. Keep aside.

In a baking dish, put 3/4 of the tomato sauce at the bottom. At this point, layer the thinly sliced vegetables on top of it. Drizzle over the rest of the olive oil, dried herbs, salt and pepper and the remaining tomato sauce.

Cover with foil and bake for 40 minutes. 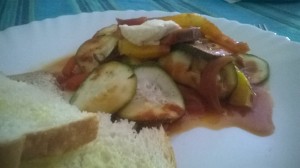 A good dollop of ricotta on top and buttered toast 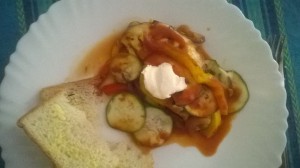